The founder’s progressive vision of female education has been reaffirmed in response to social changes and needs and spread to 150 Sacred Heart schools in 32 countries; Our sister schools continue to foster a close relationship.

In 1951, the first graduation ceremony was held. On this occasion, the then-Prime Minister, Shigeru Yoshida, delivered a congratulatory address. The alumnae include Sadako Ogata, the former United Nations High Commissioner for Refugees, Atsuko Suga, the scholar of Italian literature, and Kazuko Watanabe, the former president of Notre Dame Seishin University. The University has made steady progress by responding to the students’ enthusiasm and needs in each period of time such as the extension of departments and establishment of the first graduate school by a women’s university. 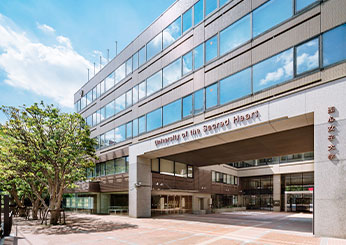 Since 2014, the University now offers students more independent and creative fields of learning. In 2017, on the occasion of the opening of Building No.4 and the Sacred Heart Global Plaza, the Sacred Heart Institute for Sustainable Futures was established. The University continues its constant advance toward further developments.